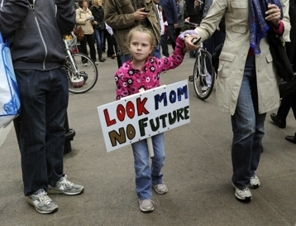 Recent changes to financial aid regulations have reduced access to post-secondary education for the poorest Americans, seeming to indicate a hardening of the lines of social class. The most significant change in the 2012-2013 aid year has been the denial of any federal aid for those without a high school diploma. This changes a policy that allowed non-high school grads to take a test called the “ability to benefit” test. If the student was able to demonstrate ability to do college level coursework, they were eligible to apply for financial aid. The new regulation means that people who, for whatever reason, were unable to complete high school are now unable to apply for all types of federal financial aid. This change disproportionately affects students from low-income backgrounds, who often face economic necessities that force them out of high school and into the low-wage workforce. As of 2012-2013, they are no longer able to get assistance to even attend community colleges to better their lives.

The “lifetime limits” for receiving Pell Grants also went into effect for the 2012-2013 school year. This restricts the amount of grant assistance a student can receive to the equivalent of six years of full-time study. After the student meets these limits they are limited to getting student loans. On the surface this seems reasonable (six years seems like a long time), but it fails to account for the situation that has faced several million workers over the last decades, where technology changes have dramatically changed the way previously low-tech jobs are done. The Department of Labor has estimated that the average American will have 3-5 career changes in their lifetime. Access to the Pell Grant, a program that specifically assists low-income students, has allowed millions to re-skill for job changes forced on them by the tumult of the capitalist job market.

The income limit for Pell eligibility was also reduced for 2012-2013. The income amount for an automatic zero EFC (full Pell eligibility) was reduced from $30,000 to $23,000 for a family of three with one in college, a 76% income reduction!

All of these changes are aimed specifically at low-income workers and their families, and all were changes made by the Department of Education under the Obama administration. They indicate an intentional, bi-partisan program to restrict social status change and harden class lines by limiting upward mobility through education, while at the same time doing nothing to address the issue of downward mobility that has accelerated since the 1980s. Social mobility in the United States will now have only one direction: down.

Two-year schools across the country are already showing a dramatic drop in enrollment, with the biggest drops being in the poorest areas: community colleges in Alabama, Arkansas, and Mississippi reported double-digit declines among their poorest students (http://diverseeducation.com/article/50618/# and http://www.nasfaa.org/Main/fa-news/State/Pell_Grant_Changes_Limit_Access_For_Some.aspx).

The class war is fully underway and is being reflected in access to higher education for the working class.