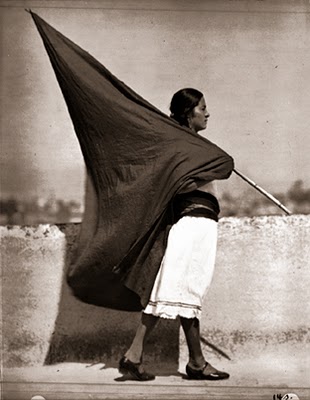 On March 8, 1908, thousands of women left their jobs in the sweatshops of New York City’s Lower East Side and took to the streets to demand their rights as women and as workers. In 1917, their sisters in Russia followed suit, and helped to bring about the revolution that overthrew the Tsarist autocracy. And in Spain in 1936, the anarchist women of Mujeres Libres helped to free their sisters from centuries of oppression.

In more recent times, women have played key roles in the civil rights and anti-war movements of the 1960’s and early 1970’s. In the 1990’s and into the 21st century, women workers are still in the forefront of the continued struggle against sweatshop conditions in many industries and services, the world over. This vibrant movement has already won important victories, both against the institutions of power in our society as well as against the more subtle systems of oppression that pervade the personal relationships of women. Gender liberation is inseparable from class struggle.

The Workers Solidarity Alliance honors these women, as well as the countless others in every corner of the world, who, generation after generation, rise up against inequality, oppression, and domination.

We salute their struggles and the sacrifices they’ve made.

Still, the dream of freedom, equality, and peace for all people is far from reality. Every day, women continue to confront sexism in their personal relationships as well as sexual harassment and violence on the job, in the streets, at home, and in the movement. Millions of women workers are still ruthlessly exploited. The right-wing and religious fanatics threaten women’s most basic right to control our own bodies.

The roots of sexism and all oppressive relationships are intertwined deep within the systems of hierarchy, authority, and militarism that dominate society. These principles are the basis for every modern state and established socio-economic power. We know that this is not simply “the way it is.” There are other, better possibilities for a more livable world. Faced with overwhelming webs of oppression and subjugation, we must fight back and take control of our own lives. We can begin by organizing within our communities, our schools, and our workplaces.

We strive for a society in which one person or group of people do not dominate or exploit another. In such a society there would be no basis for sexual oppression, domination, or class exploitation. We must work to replace the institutions of power, the nation-state, and capitalism with a worldwide system of grassroots empowerment and self-management of all facets of social and economic life. See the dreams of these women workers fulfilled; join us in a movement with an extraordinary history and an inspiring future.

Help us build this new world based on freedom and libertarian socialism.