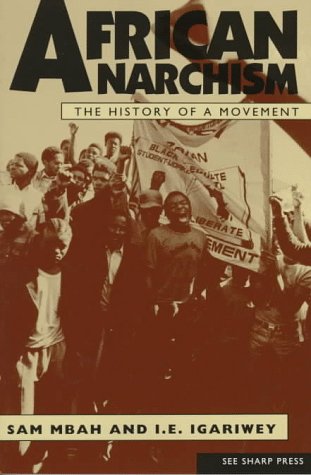 On November 17, the blog administrator for Sam Mbah’s website announced that Sam had died on November 6, 2014, “of complications arising from his heart condition. His recovery had appeared to be going well, but then a crisis arose and he was rushed to hospital. He died a short time later.”

On behalf of the Workers Solidarity Alliance (WSA), we send our condolences to the family, friends and comrades of Sam’s. Some of us met Sam when, on very short notice, hastily organized his US tour some years ago. We reflect back on the key and pivotal role Sam and the Awareness League played in Enugu State, Nigeria in the struggle against the then military dictatorship of Abcha.

We remember well the WSA’s initial efforts at developing relations with the AL, a relationship which was partially successful in bring the AL into the fold of the International Workers Association. And, to help develop international relations between the AL and countless other anarchist, libertarian socialist and syndicalist individuals, groups and unions throughout the globe.

It was delightful and pleasing to read the (then) new AL declaration, proclaiming themselves “a social libertarian organisation inspired by and committed to the ideals, principles, objectives, goals, ends and purposes of revolutionary socialism and anarcho-syndicalism, characterised as the anti-theses of statism as well as their manifestations and institutions thereof.”

Perhaps, just perhaps, the efforts of former members of the US Revolutionary Socialist League, Bob McGlynn (of Neither East Nor West) and the WSA have helped our Nigerian comrades move from your typical marxian socialist views to that of anarcho-syndicalism and libertarian socialism.

The relationship deepened and develop. Many of us worked especially hard to make sure our pre-internet and pre-cell phone campaigns to aid AL prisoners, try and purchase a computer and other supportive and solidarity oriented activities gained as much support as could be garnered. In some aspects, we were successful, in others not. Certainly the campaigns that we helped to initiate and push were some of the best that some of us can recall.

Sam’s tour to the US was less then stellar. We had two weeks to arrange a national tour. Again, this was done pre-internet and pre-cell phone. It was tough, it was uneven, very last minute and it was clear to this writer Sam was terribly disappointed and let down. His hopes that a big, effective and well financed and oiled movement existing in the US were dashed. When dropping him off at the airport, I sensed his disappointment. Communications thereafter dropped off precipitously.

After a number of years of not hearing from the AL, in reply to one of our letters, WSA get a communication which started off in the most pleasing and satisfying manner: “It has indeed been a long time since the Awareness League last communicated with the WSA. Suffice it to say that the AL holds the WSA in special esteem and will continue to. We continue to look forward to improved relations and a deepening of our ties through future co-operation/collaboration.” (May 2001) I believe that was the last communication we had with the AL.

WSA tried to keep up with the AL even after we were no longer part of the IWA. Apparently the AL was dissipating in membership and activities due to a number of factors, most of all the downfall of the military dictatorship.

“With the advent of civil rule, many in our ranks have tended to lower their guards. The philosophical and ideological underpinning of the struggle for a truly free society remains at best, underdeveloped in these parts. And this coupled with the fact that life here is an everyday struggle, to be able to eke out a living or survive.

Yet those who were left in the AL continued to have “high hopes and expectations of transition to civil rule give way to frustration, cynicism, despair and discontent threatening to boil over. We are gradually and steadily returning to the trenches once again.” Whether or not significant numbers returned to the trenches to keep the AL alive is unclear. It seems like they were not able to hold the necessary numbers together.

In his last interview in 2012, Sam was clear and sober in making this point, a point
that many in countries that have developed or historical libertarian socialist, syndicalist and anarchist traditions oft times never seem to get or understand:

“ I want to say a few words to our anarchist friends and groups that in the past associated with us, supported us, in one way or another, especially from Europe and North America. I say to them that anarchism is not dead in Africa. But it is important for them to appreciate that anarchism as a movement, as a political movement, as an ideological platform, is still going to take some time to crystallize here.”

The take away being, that anarchism, as many of us in the West know it, will take its own path. Perhaps not even a straight one. But we should not sit in judgment, but offer the type of solidarity required to help keep comrades connected, even broadly, to the global movements.

There are no perfect souls, only those who try their best.

Sam tried his best at helping to build, develop, nurture and organize an effective libertarian socialist and syndicalist movement in the heart of Africa. With no real resources, under the iron heel of a military dictatorship he did his best. And the WSA is glad that we were able to do our small part aid their efforts.

Sam, comrade, as the slogan of the AL was “Holding aloft the banner of the struggle”, in our memory, you will always be holding that banner aloft. Farewell comrade, farewell.