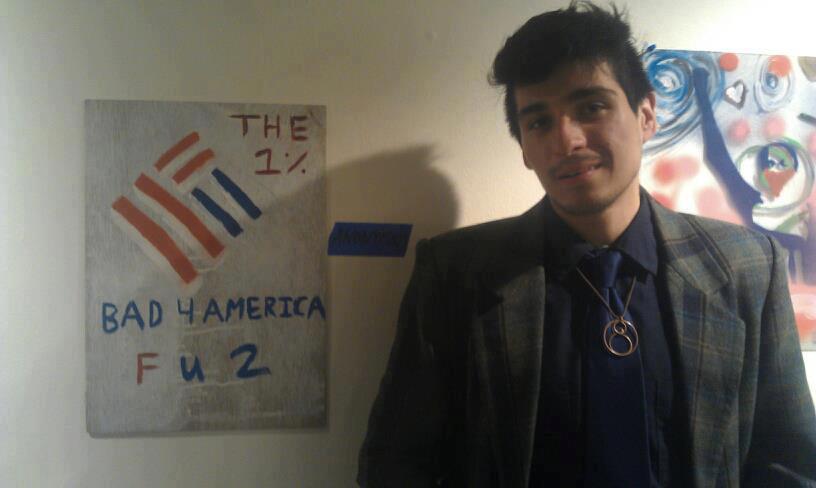 On November 14th, Alejandro Torres was arrested along with five others in Pasadena at a Zapatista solidarity action outside of a speech by Vicente Fox, the ex-president of Mexico. Now more than a month after his arrest he is still in jail. Ever since being hauled away by the police with his comrades that night, Alex has been caged in jail for the single crime of being far too poor to afford the extravagant $100,000 bail that the judge has set for him. Help us bail Alex out of jail so that he can spend Christmas with his family and join us on the outside so that we can fight this case of political repression together! We’ve managed to arrange an agreement with a bail bondsman to bail Alex out for $3,000 instead of the unreachable $10,000 that would normally be required. We think that we can get scrape together the money for this if enough comrades are generous and pitch in.

When we arrived at the Civic Auditorium in Pasadena on the night of the 14th, we came expecting nothing more than to get together with a small group of activists to pass out some fliers and screen a documentary about the Zapatista struggle. The police came with a different plan in mind. By the time we had arrived downtown, the Los Angeles Police Department had already put the Pasadena Police Department’s Counter Terrorism Unit that dangerous protesters were on their way to cause trouble. The Pasadena police were primed for a confrontation. We were primed to watch a movie.

Before anyone had passed out a single flier or shouted a single chant, the police had already ejected the first handful of protesters to show up from the public sidewalk in front of the Civic Auditorium. With a last-minute permit from the Auditorium backing them up, they claimed that only ticketed guests could be on the sidewalk. What this meant in practice was that anyone could do anything they pleased on the sidewalk as long as the police didn’t think that they were part of the protesters. Anyone who the police identified as being with the protesters would be threatened with arrest if they approached to close to the auditorium, while those who looked like they belonged in the Pasadena’s wealthy and white downtown (including those who actually were protesters) went unquestioned.

Soon after Fox’s speech began the police made their first arrest. While stopping a group of protesters who were trying to walk back to the designated protest area on the opposite side of the street, the police waved through the one of them who was white and wearing a dress and shawl. Soon realizing their mistake, she was handcuffed and arrested. Sergeant Bobby Crees then began following one comrade who was trying to return to the main group after their attempt to reach the crosswalk was blocked. Supposedly with the intent to ticket him for jaywalking, the cop, along with backup, followed him straight into the small and quiet crowd of protesters, where they began hitting and punching protesters indiscriminately. Soon four more protesters were arrested, while others were bruised and bleeding, and children were crying. A sixth comrade was targeted for arrest later that night while sitting at a bus stop.

After being held in jail for two days, Alex’s bail was set for $100,000. Largely on the basis of a vandalism conviction for taking down a paper ‘no overnight camping’ sign at Occupy Long Beach the previous year, for which he had failed to return to report his community service hours for. He was also deemed to be too high of a risk to let out of jail because he has given up having a job and stable home in favor of being a committed foreclosure defence organizer, camping out day and night at the Hernandez family’s home in Van Nuys to prevent the bank and sheriffs from evicting them. His ‘history of attending protest events’ was also cited as a reason to give him such high bail.

Alex is an extremely dedicated revolutionary. He is committed to the ideals of Zapatismo and to the struggle for Chicano liberation. He has an incredibly strong will and spirit, and has greeted us with a raised fist every time we have seen him in court. But there is only so long that most people can go in prison before being beaten down. It is important for all of us – for Alex’s friends, family and comrades; for himself; and for the movement – that he be released as soon as possible. Please help us get together the $3,000 we need to put Alex back where he belongs – in the struggle, side by side with us.

Meanwhile, the other five arrestees who are outside of jail are all in the process of fighting the charges against the Foxy 6, which variously include felony resisting arrest and assault on a police officer charges, as well as inciting a riot and unlawfully being in a permitted area. We will be providing updates on this case as it progresses and we prepare a public campaign around it.