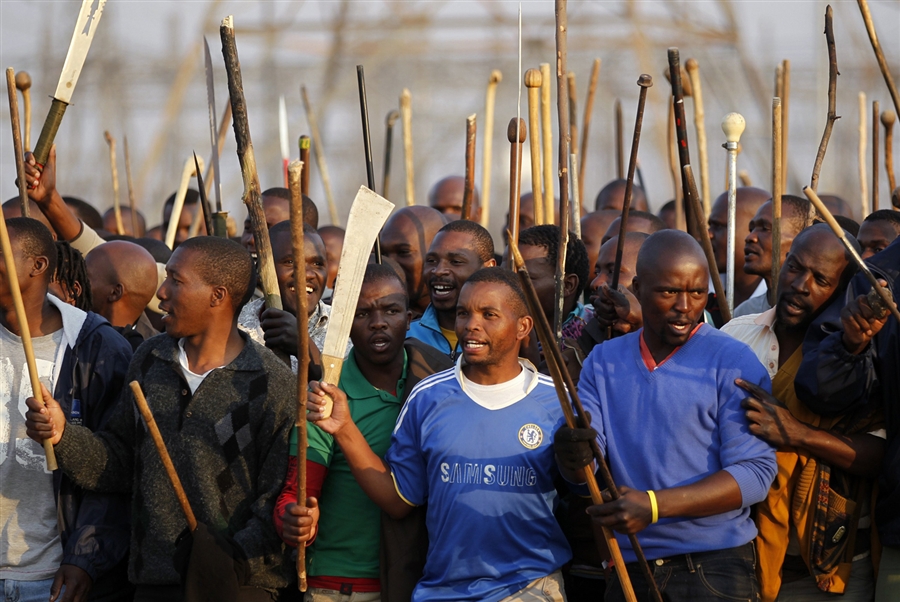 We, members of the Workers Solidarity Alliance, send our deepest condolences to the families and friends of the murdered miners.

On August 16th police open fire on striking miners outside the Lonmin platinum mine in South Africa’s north west province.  Defending their interests, over 30 miners were killed and over 70 suffered injuries in a gruesome display of the violence upon which this society has been built.  One day prior to the massacre, the Guardian & Mail reported that nearly 3,000 workers gathered daily near the mine for several days, that the striking workers had said they were a united force with no particular allegiance to a union and finally that negotiations had broke down between the striking workers and the police.  Its’ also known that the workers have stopped production in a dispute is over pay, a dispute between workers and bosses.

A video, that is very graphic in nature, clearly shows that the massacre was proceeded by police stalking near the gathering not in standard riot gear like batons and shields, but rather looking like foot soldiers wearing fatigues and carrying automatic rifles at the ready.  It was quite obvious that these mercenaries of capital fully intended to engage the miners as if they were on a modern battlefield with a well-equipped enemy.  It would seem the strikers took this as a clear message from the mining bosses and the state that workers standing up for themselves in unison is an activity that can no-longer be tolerated.  The arrival of militarized police appeared from the outside as a direct provocation and a threat to the continuation of the strike.  It was seen that the workers resisted this threat with their available means.

Before the blood had dried at the site of the massacre, the mass-media wasted no time with its’ misdirection and deception.  Framing the story as a “tense scene” between rival unions with police caught in the middle, the media have done well playing a strong defense for the mine owners and their partnership with South Africa’s government.  Sure, it can be said that union bureaucrats from “rival” unions had been playing a power game at the mines prior to this massacre.  At one point in the days prior, workers had even fell victim to snipers allegedly acting in the name of one of the unions.  Despite this bureaucrat fueled discord, it would seem that the bulk of the rank-and-file miners have taken to direct action against the mine owners.  After all, the large gatherings outside the mine complex were said to of been happening under no specific union’s flag.  It was in this struggle, the struggle of the workers against the bosses, that the strikers eventually faced down automatic rifles.   Most disgracefully, in the immediate aftermath of the tragedy, the union leaders have wasted no-time helping the media perpetuate its’ lies by pointing a shaking finger of blame at each others organizations and members.

While union bureaucrats and the media have been tripping over  themselves trying to assess the blame and misdirect attentions in this clear-cut case of state violence on behalf of the rich, the mine owners have threatened to fire every striking miner on Aug. 20th if they refuse to end the strike.

The Workers Solidarity Alliance sends our solidarity to the workers engaged in united struggle for higher wages and encourage workers everywhere to spread the news of the massacre and discuss it with neighbors and co-workers.  We condemn in the strongest possible manner; the police, the mine owners they work for, the worried South African state, the competing union hierarchies and any others who stand in the way of the unity of workers in desperate struggle for a better life.  We understand this massacre in a global context of increased violent repression of independent movements of workers advancing or defending their conditions.  We understand this massacre to be an attack on workers everywhere, a futile attempt to scare us away from uniting and advancing our shared interests.  We stand in solidarity with actions, however far removed from South Africa itself, that draw attention to the massacre and the brutality of capitalism.

A workers best weapon is their solidarity with their fellows.

Wherever workers are in struggle, may the worlds poor and oppressed call out in unison: An injury to one is an injury to all!