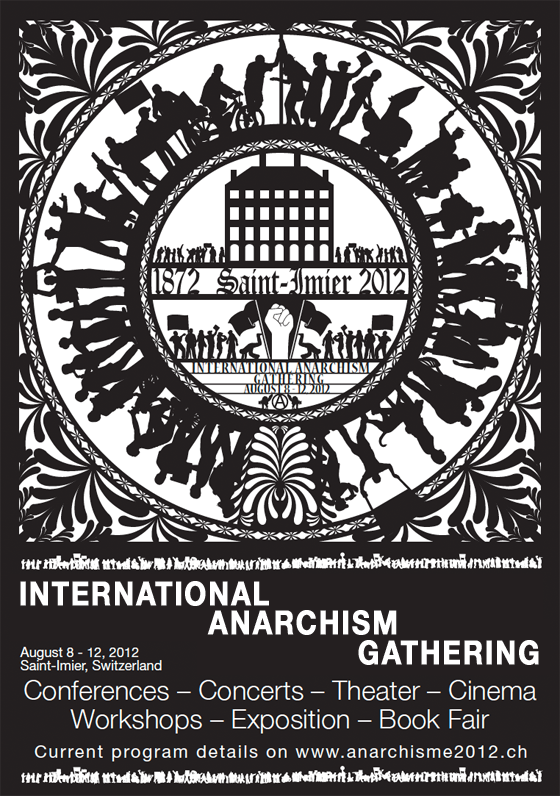 Upon returning from the International Gathering on Anarchism in St-Imier Switzerland, two anarchists from the UK were detained and harassed for hours by remarkably poorly informed SO15 (counter-terrorism) gang-members.  During the detention at Heathrow airport, our comrades had their personal effects rummaged through, their biometrics taken (DNA, fingerprints etc. . . ), and the data from their phones and their notebooks copied.  It would seem that the interrogators had little to no clue about what activities class-struggle anarchists are actually involved in.  By their own words, it appears that these two ace-detectives lazily collected all their information on anarchists and anarchism from the hacks that run that countries’ mass-media.  The officers repeatedly and ironically accused our friends of criminality and violent behavior.  These “protectors” of the people used lines of questioning designed to illicit angry, emotional responses from our comrades.  One of those comrades was threatened with follow-up police action.  It is fair to point out that the violence and criminality these agents were so concerned with stopping, was in fact coming conspicuously from the hands and mouths of those same incompetent foot-soldiers of the state and capital.  Incidents like this highlight the fact that we are ruled by gangsters and criminals who’ve draped themselves in the flags of so-called legitimate, democratic governments.

The Workers Solidarity Alliance condemns this attempt at intimidation. We understand our comrades’ detainment to be a message sent to the broader, global movement of which they are a part. This is another incident that highlights the fact that movements of the oppressed and exploited are facing stronger repression from the hired guns of capital. The state certainly appears to be keen on using those same tactics against the movements that aim to abolish it completely, both in the UK and around the world.  The absolute necessity of a strong internationalism and strong feelings of solidarity between our far flung organization is more apparent than ever.

Along those lines, the Workers Solidarity Alliance offers, in the most sincere of terms, solidarity with the comrades who were detained and harassed.  We are pleased to know that you’ve made it home and that you’ve told your story to those who will listen.  That solidarity naturally extends to the organizations those comrades are members of, the movements that they organize with and the struggles in which they are engaged.  We wish to encourage an open and robust communication with our comrades across the oceans and great landmasses of the Earth, so that information on incidents such as these is quickly disseminated and whatever mutual-aid that can be offered is offered in a timely manner.  We further wish that our solidarity not remain in the house of periodic statement releases, but that it take the form of action and material aid when-ever needed.

We, the members of the Workers Solidarity Alliance, look forward to stronger communication and solidarity with the international movement.  Expect to hear from us frequently and in good spirits.  May all of our comrades travels always be safe, pleasant and free from the interference of the states goon squads.

Yours in solidarity and struggle,