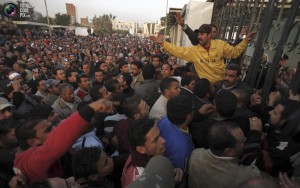 People, including relatives of Gharib Abdelaziz Abdellatif, attempt to enter the hospital grounds to retrieve his body in the port city in Suez, about 134 km (83 miles) east of Cairo, January 26, 2011. Gharib, 45, died of internal bleeding after police shot him in the stomach on Wednesday, according to medical sources. Police fought with thousands of Egyptians who defied a government ban on Wednes-day to protest against President Hosni Mubarak’s 30-year-old rule, firing rubber bullets and tear gas and dragging away demonstrators. REUTERS/Mohamed Abd El-Ghany